BFAR – My Journey through 6 Months 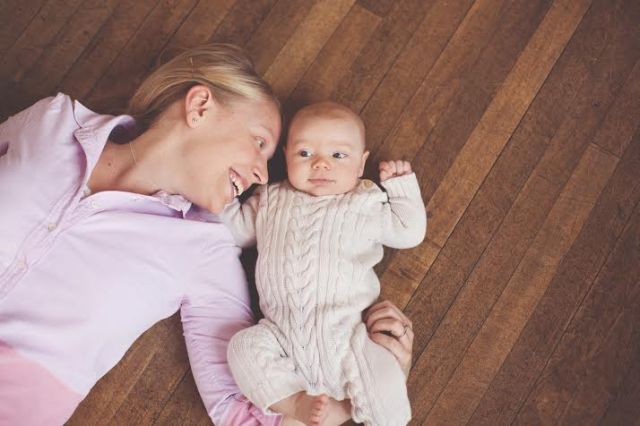 When I became pregnant with my son, George, I knew I wanted to breastfeed him.  There were a lot of reasons that this was important to me: nursing him would be better for his health, for my health, and it just felt like it was the natural thing to do.  Every time I learned another thing about breastfeeding, I was amazed.
I read so many horror stories on the internet, from bleeding nipples, to low milk supply, to oversupply.  In fact, my mom hadn’t been able to nurse me due to recurring mastitis, and she never even tried with my brother.  I knew that nursing could be really hard – it could be impossible.  And that was from women who had never had breast surgery.
When I was 17, I had a breast reduction.  It was not a tough decision to make.  I was told that there was a chance I wouldn’t be able to breastfeed, but I was 17 and not thinking that far down the line.  I had the surgery the summer I graduated from high school, and I felt so much more confident.  Although I had the scars to remind me, it became a distant memory.
Fourteen years later as I prepared to give birth, I started researching as much about breastfeeding after breast reduction as possible.  I read Diana West’s book, Defining Your Own Success: Breastfeeding after Breast Reduction Surgery.  In it were many stories about women who had varied amount of success with breastfeeding.  I felt like the book prepared me to fail, to be mentally OK with the idea that exclusive breastfeeding was not the only option.
I called my plastic surgeon to ask his office which type of surgery I’d had (inferior pedicle).  That method was known to have the best success rate for nursing because it leaves the nipple intact.  I was relieved.
I read and read and googled everything I could on the internet.  I think I found one success story on a blog but for the most part success stories were few and far between, especially for first time moms.
Perhaps the best thing I did was read Ina May’s Guide to Childbirth.  Her book helped shape my whole birth plan.  Instead of giving birth in a hospital, I chose to have my baby in a freestanding birth center.  Although her book did not directly discuss breastfeeding after a breast reduction, it did offer many suggestions applicable to all women attempting to breastfeed – skin to skin contact immediately after the birth of the baby, rooming in with the baby, initiating breastfeeding as soon as possible after the birth, limiting the use of drugs and other modern interventions so that baby is wide eyed and awake after birth, no pacifiers, bottles, supplementing, etc.  I felt that having a natural birth, without any medical intervention (no pitocin, no pain medications, etc) would set me up for the best breastfeeding journey.  Additionally, the birth center released its patients just 5 hours after the birth of the baby.  I’d recover in my own bed, with my husband and mom caring for me, instead of nurses I didn’t know, which was one of my biggest fears about a hospital setting.

I’m not sure if I would have been as successful breastfeeding had my birth story been different, but I am so thankful that I had an uncomplicated labor and delivery, and I was home in my own bed the night that George was born, snuggling with my sweet baby.
My milk came in within 48 hours of having George.  George was born 2 weeks late at 9 lbs, 6.5 oz.  I think he got down to about 8 lbs 12 oz, and was back to 9 lbs 1 oz by day 6.  He nursed like a champ!  He was hungry ALL the time and those first couple of weeks my nipples were SO sore, but no one, myself included, ever asked if he was getting enough milk.  There was never a doubt in my mind.
I wanted to wait we had really settled into a routine to write about my experience.  It was so wonderful, I didn’t want to jinx it. 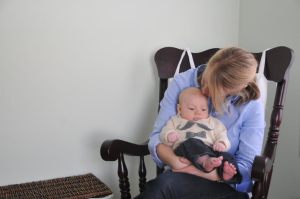 I exclusively nursed George until he was just 5 days shy of 6 months old.  We then started introducing solid foods via baby led weaning.
I think that there are a couple of things that really helped us to have a successful nursing relationship.  One: a birth team and husband who knew a lot about breastfeeding and who were 100% supportive.  Two: a ton of education while pregnant.  The birth center offered a one on one consultation with a lactation consultant during one of the last visits; one of the Bradley Method classes was dedicated to breastfeeding; in addition, I had the chance to do lots of research on sites like kellymom.com, which I bookmarked for questions that arose after George was born.

Nursing my son might be the coolest thing I’ve ever done.  It’s definitely the most beautiful thing my body has ever done, in addition to growing this tiny, perfect human.  I hope and pray that every woman who wants to breastfeed has the opportunity to do so, and that my story can help offer some hope to women who have chosen breast reduction surgery.
UPDATE:
George is now 9 months old are we are still enjoying nursing – maybe more than ever!  It calms him if he’s upset, it helps him sleep if he’s tired, and it’s so easy now that he can more actively participate.  I’m planning to let George self-wean, and I definitely don’t see that happening anytime soon.

We invite you to share your pregnancy, birth, and parent stories with us! Please email jaime@health-foundations.com with your stories or questions about sharing. Thanks!!!